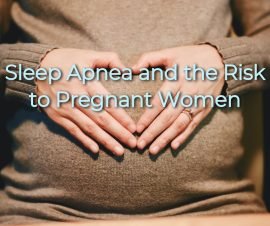 Obstructive sleep apnea (OSA) is estimated to occur about twice as often in men than in women. However, it is found that pregnancy does increase the risk and instance of sleep-disordered breathing.

Experts suggest that the condition can arise as the result of changing hormones and physiology in pregnancy (e.g.- Certain hormones are found to lead to the congestion of the upper airway. Natural weight gain can lead to snoring and an obstructed airway). If left untreated, they can and do lead to preventable health issues for both mother and baby, before and after birth.

The daytime sleepiness brought upon by the OSA in addition to the natural fatigue that comes with pregnancy can be extremely dangerous for the mother in certain situations that require clear cognitive functioning. As for physical comorbidities: preeclampsia, pre-gestational diabetes, and preterm delivery are all seen in an increased volume in mothers with OSA. Of course, this can all be extremely dangerous for the mother and child, leading to complicated births and babies that may have compromised immune systems and birth weights.

-Women with OSA are found to be twice as likely to need a hysterectomy.

-Around 65% of pregnant women with OSA were required to have a C-section.

-Proper treatment of the condition can ensure the health of the mother.

-Studies show that ICU admission is higher in pregnant women with OSA than those without.

Polycystic Ovary Syndrome (PCOS) is a common hormonal disorder that causes enlarged ovaries and cyst that can cause and exacerbate certain health issues during pregnancy.

With these particular comorbidities, the issues associated with PCOS such as fatigue, weight gain, and high cholesterol levels can worsen and compound itself with the added OSA. An increase of androgens and testosterone in the endocrine system (caused by pregnancy) are found to disrupt sleep receptors in the brain that control breathing.

Having a serious sleep disorder like OSA on top of all of the other stresses that pregnancy brings is a scary challenge to overcome. However, given the proper medical guidance, your patents can certainly gain a renewed sense of control and peace over their health issues. The previously mentioned complications can be prevented by receiving a proper diagnosis and treatment recommended by a primary health provider, after which the health of both baby and mother will improve. You may wish to ask your pregnant patients about bedtime congestion, fatigue, and sudden or worsened snoring.