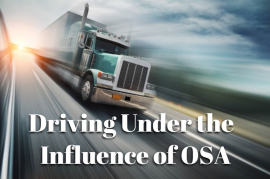 Most of you would never think of hitting the wheel after a few drinks. You wouldn’t give a second thought to honking and shaking your fist to anyone speeding or looking down at their phones.

But would you keep yourself from driving for being a bit too drowsy? When you’re just tired enough, and in a second you find your eyes fluttering a bit too much, and in a moment of terror, you pull your head up after finding yourself dozing off. According to the Center of Disease Control (CDC), 1 in 25 of you, have been in this exact situation within the past month alone.

For many, these dangerous, but dismissible few seconds (or minutes) may be symptomatic of something more serious, and something that will have a long term, far reaching effect on their health.

The reality is, much of this impaired driving may very well be caused by Obstructive sleep apnea, a condition infamous for perpetuating daytime sleepiness and creating a variety of cognitive issues such as slow reaction times and memory problems. Of course, this could lead to the inability to stay awake during seemingly active task (being examined in a doctor’s office, for example).

According to the CDC, staying awake for 18 hours straight gives you the equivalent driving ability as when you have a blood alcohol level of .05 (.08 is considered legally drunk). In another parallel to drinking, studies also show that excessive sleepiness decreases our judgment and increases risk taking. Sufferers’ of sleep apnea, with the previously mentioned daytime sleepiness and cognitive impairment, are particularly at risk for feeling like this on the road. No one should be expected to function when they’re impaired on that level, and anyone in a different situation feeling impaired that way would have their keys taken out of their hands.

You don’t have to look far to find horrifying, real world, examples of the tragedy that driving under the influence of OSA can bring. The National Highway Traffic Safety Administration estimates that drowsy driving was responsible for 72,000 crashes in 2013, but you can see some examples of prominent, recent cases of commercial drivers being negligent due to OSA here.

Sept. 2013: Fatigued Greyhound driver flips bus, severely injuring 5. Driver was given previous recommendation to seek out a sleep study. Driver did not take test and was later found to have Obstructive Sleep Apnea after a court ordered sleep test.

Oct. 2014: Engineer for the Metro-North rail suspected of having sleep apnea fell asleep as the train was speeding through a tight curve, killing 4 and injuring more than 70.

Sept. 2016: New Jersey train crashed into Hoboken station after bumping the post at the end of the track, killing one and injuring 110. Engineer was known to have issues with OSA.

Jan. 2017: Long Island Rail Road commuter train crashed into Atlantic Terminal Station in Brooklyn after failing to stop at the end of the line, injuring 108.

In addition to having a laundry list of horrible health effects on the individual, driving while leaving this condition untreated is a public safety issue that could easily be curbed with some further awareness and action.

Encourage anyone you believe to be at risk to get sleep tested. Everyone deserves to be safe on the road.

Be sure to get more info and news on sleep apnea on on our Facebook, Twitter, and LinkedIn!