It is estimated that 22 million Americans suffer from sleep apnea, with 80 percent of the cases of moderate and severe obstructive sleep apnea undiagnosed.

If we accept the reports that a minimum of 80% of Sleep Apnea is undiagnosed, then only 20% is actually addressed in any fashion.

The undiagnosed may fit into these categories:

1. Patients have no idea that such a thing as Sleep Apnea exists.

Hard to believe it but there are such people.
2. They know about, but have no idea that they suffer from, Sleep Apnea .
“Isn’t snoring normal?”  “Doesn’t everyone wake up 4-6 times a night?”
3. They know they have the symptoms of Sleep Apnea but are in denial.
I know a smart lawyer who insists sleep apnea does not exist. He tells me that I am “just as bad as [his] wife” who listens to him snore and gasp for breath every night.
4. They know they have problems but refuse to do anything about it.
Some have heard horror stories about CPAP machines and simply do not want to take action. They need to learn about the oral appliance therapy (OAT).
5. Misdiagnosed Sleep Apnea.
There is a lack of knowledge of sleep apnea among many health professionals.
It is very difficult to get these people to want to be screened and diagnosed by just telling them that something is wrong. It is necessary for them to “see” it for themselves and for them to adopt a top down approach – of their own volition.The best way to do this is to educate them in the most simple, effective, non intimidating and cost effective way – we can show them films of OSA victims having sleep events.  We must find a way to get them diagnosed and filmed and then show them their results. This is an massive education deficit issue. 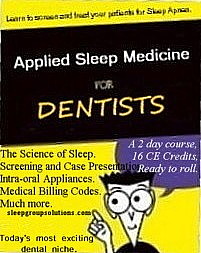