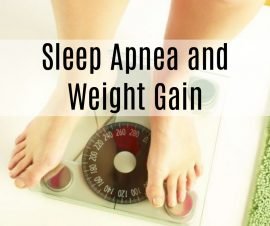 It’s no secret that sleep apnea and weight gain have a close association with one another. While not every person suffering or at risk from obstructive sleep apnea (OSA) are overweight, the evidence of their correlation is in the numbers; as it’s estimated that around 70% of adult OSA sufferers are overweight or obese.

The close relationship between the two is the result of side effects of both conditions that feed into one another, such as certain endocrinological issues (which I’ll explain in a second).  It’s also known that gaining weight can bring on sleep apnea, as excess tissues around the palate and throat brought on by weight gain may cause apneic events. Similarly, someone with relatively minor breathing disorder symptoms who go without treatment may start to gain weight. Quite simply, the more overweight you are, the worse your OSA may get and the greater the risk for complications.

To make things even more difficult for anyone in this situation trying to lose weight, it’s observed that the typical daytime fatigue that is brought on by OSA known for keeping patients from exercising.

Ghrelin and leptin are both hormones that regulate your body’s energy expenditure and hunger level. Ghrelin is a neurotransmitter that functions as something that registers hunger, while leptin communicates how full you are. These hormones, thrown out of balance by a lack of sleep caused by OSA, may cause unregulated hunger levels and excess food consumption.

The third (and possibly most concerning) response caused by OSA that may cause overeating is insulin imbalance. Studies show that untreated sleep apnea is linked to an increased risk of insulin resistance, and even diabetes. This inefficient use of insulin can cause glucose to not be properly absorbed by the body, leading to, again, an increased apatite.

While the points mentioned above may show a bleak outlook and an unbreakable cycle for sleep apnea sufferers, there is of course hope for most cases. The treatment of sleep apnea will help break the cycle of hormone irregularity and give the patient more energy to stick to an exercise regimen. This can serve to help further treat a patient sleep apnea while majorly reducing one’s risk for serious health complications by reducing the risk for coronary disease and diabetes.