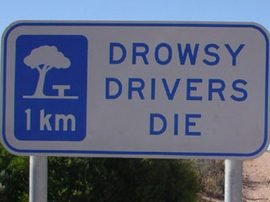 According to a recent article posted by Safety and Health Magazine, before a proposed rule to study obstructive sleep apnea among truck drivers and railroad workers, the government first sought public comment on the issue.

The public did not hesitate to offer feedback: A total of 593 comments were submitted to the Federal Motor Carrier Safety Administration and the Federal Railroad Administration. The comments included a wide range of viewpoints about whether the agencies should regulate the diagnosis and treatment of OSA for transportation workers in safety-sensitive positions.  Many commenters agreed that fatigue is an important safety issue among transportation workers.

Sleep apnea is a respiratory disorder that can cause frequent breathing interruptions during sleep. The condition affects 28 percent of commercial motor vehicle drivers, according to an FMCSA-sponsored study conducted by the University of Pennsylvania. It can lead to impairment or inattentiveness during waking hours if left untreated.

Some organizations spoke out in favor of screening.

“It is astounding that airline pilots, whose planes fly themselves a great deal of the time a flight is in the air, are required to be screened for sleep apnea, yet truck drivers, who need to pay attention every second they are on the road, are not,” Road Safe America Co-Founder Steve Owings wrote.

Beth Badger, of Columbus, GA, wrote about how her father died when a truck driver fell asleep behind the wheel and slammed into the back of her father’s vehicle, which had slowed because of a crash ahead.

“Emergency [personnel], who were working the prior crash, were running for safety because they recognized that the semi would be unable to stop,” Badger wrote. “The emergency [personnel] already on site could not save my dad. He died of blunt force trauma, belted in his crushed car.

“I don’t know why the semi driver was sleeping. But to those of you complaining about the cost, I would like to know what you would be willing to pay to save a loved one’s life. I thank the FMCSA for looking into this matter. Many comments made sense [about being sensible] about this issue. But to just complain about the cost is short-sighted and painful.”

Do you think sleep apnea testing should be mandatory in these types of professions?