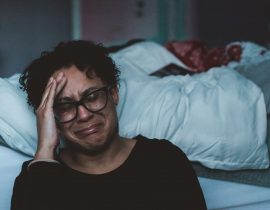 According to the World Health Organization, one in four people will be affected by some mental or neurological disorder in their lifetime. General wellness is intertwined with mental health, and sleep is a well-known factor that has a huge impact on both.

Everyone has experienced the impact that lack of sleep can have on their general health and mood. For many, this can be corrected by implementing a better sleep schedule. But what if you can’t get a reliable night’s sleep (and even worse, stay oxygen deprived throughout the night)?

For those suffering from sleep apnea, daily sleeplessness and waking up due to a lack of oxygen can have long-lasting effects on the mind and body. This is due to the added issue of apneic events causing a lack of proper oxygen levels for an extended period.

Sleep apnea is a serious problem with several serious medical conditions, such as diabetes and high blood pressure. It shouldn’t be surprising then that the condition can have a serious impact on mood and cognitive functioning, such as trouble concentrating, memory issues, poor decision-making, depression, and anxiety where such symptoms may not have occurred before.

This may be because those with sleep apnea have lower levels of GABA (Gamma-Aminobutyric Acid, a neurotransmitter that blocks impulses between nerve cells and inhibits mood) and high levels of glutamate (a neurotransmitter important in memory and learning functions).

Aside from hormonal and neurotransmitter imbalances, apneic events can cause panic attacks at night due to the sudden choking and gasping for air. This, in addition to the sleep debt accrued throughout the night, can worsen anxiety symptoms and general stress levels.

Sleep apnea may also impact an individual’s sex life and the general intimacy they experience. Adding to the fact that a bed partner of someone that snores might just stay out of the bedroom, the disorder is known to cause sexual dysfunction.

Even more concerning, researchers have found that sleep apnea contributes to a greater risk of Alzheimer’s disease, and may even speed up its progression. It is believed oxygen deprivation could accelerate the creation of beta-amyloid, a protein fragment in the brain that may build up to create the plaques that cause Alzheimer’s disease.

What’s essential to understand is that sleep apnea is a condition that impacts nearly every facet of your health, whether it’s your blood pressure, blood sugar levels, healing factor, and even mental wellness. As with many diseases, early detection and treatment is key to preventing a downward spiral in health. All medical professionals should familiarize themselves with the condition, especially Dentists since a majority of the signs of Obstructive Sleep Apnea can be found by looking into a patient’s mouth.

Why Psychologists are Starting to Care About Sleep Apnea. (2015, June 24). Retrieved from PsychCentral.